A simple wooden sword, a movement idea, a structure, a kata. Few things, which are sufficient, in order to bring an interested sportsman in difficulties. How does it come that the legs stand differently than they should it? Or: turn to the left with the wooden sword during simultaneous cutting.&nbsp;»Is it possible to learn this power?« Which seems to be easy, can become simply in the first hours of Iaido quite fastidious. Nevertheless each Friday eight interested men and women fall themselves with full energy into the adventure of Iai.

At first we learn — like always at the beginning — completely simple movements and rules. How do I keep the sword best? Can I I rest on my sword during breaks (answer: rather not)? How is Japanese conversational language in the Dojo? Also the controlled cut belongs of course to the constant program. But that is a little different, as you expects: the sword­movement should you not slam to the ground or leave deep scratches in the hall floor — see above keyword »Energy«.
In addition there is the question of fluent cutting when simultaneous turning arround; rise up and pulling of the sword from sitting. Thats it! These small exercise and fundamental Kata will give you a quick overview about the scene.

Iaido practices pulling and hitting the sword in one single action.

A motion sequence of special cuts, an impact or defense from standing and sitting positions is typical. Then a locking cut or stab follows. The combat range becomes secured. The sword is cleaned and led back into the sword sheath. Everything happens with overview and in internal peace.
This expiration is called »Kata«. The Katas which can be learned are very various and numerous. We practice mainly Muso Shinden Ryu Iai. Here dozens of different single katas are available. They contain, partly hidden, many sword techniques, ideas and expirations of a sword fight. The kata is finally the result of individual practice, not prescribed form. Katas are ideas, methods, practice zones, touchstones. A kata leads to reflective learning.

A majority of the Iaido training happens in self-exercise statt, thus without partners. Therefore one carries no protec­tors as in Kendo match. Only suitable clothes and a sword are needed. A Iaidoka learns balance, strenght, accuracy. He develops the perfection of the form independently and thus solely responsible. Assistance and coaching come by the correction an experienced teacher.
Deeper understanding of a Kata and feeling for correct movement with the sword adjust themselves with experience. Experience is learning and knowing by own doing. With progressive exercise length (and intensity) one becomes better and better. That stands in glaring contrast for simply strength-oriented kinds of sport. Physical power diminishes at the age. Iai (- knowledge) increases ever more. 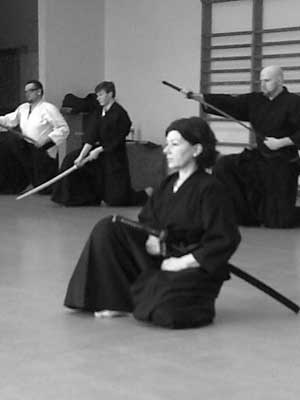 Iaido cannot be called sport, even if one comes into sweating. Iaido trains all body, mind and attitude of a (longtime) practitioner. The physical development is the basis-, your mental groth the goal of our practice. Good martial arts is integrated and does not remain on the surface.
We are not interested in deter­mind angle when cutting with sword but in efficient sword manage­ment. There is no need of »lightning-quick pull,« but »timely pulling and cutting.« Your own training, the development of you as person is benchmark of success. Graduations and documents as external signs of recognition are worthless in this context
We practice thus internal Iai. We are interested in the efficient sword guide, not the specific sword angle when cutting. “Lightning-fast pulling” is not enough, but “timely pulling and cutting”. The constant training, the development of yourself is the measure of success. Graduations *) and certificates as decorative signs of recognition are worthless in this context.

Quote from a master: »better large mirrors on the wall than many certificates«.

The art of Iaido is a traditionally aligned combat art. It is verbally passed on for centuries from teacher to pupil in the sense of Shuhari It lies in the responsibility of an Iaidoka, ato learn and conscientiously implement all techniques exactly. Simple repetition of tradition, however, leads to folklore. Inflated myth, Kitsch, personality cult and group dynamics accompany these forms, but are going to be useless while practicing sustainable authenticity. It arises a broad distributed superficiality only.
All practicing follows the founder of the style. Each Iaidoka should develop his own movement and bring in a conception. Only so the combat art can be kept alive. It renews itself thereby from the inside out.