There is a big gap between willing and ability. Iaido makes this clear and you can work against it. The following is discovered about the deeper philosophy and development of Iaido. Warning: consider the first sentence, imagination, knowledge easily distracts from the essential. 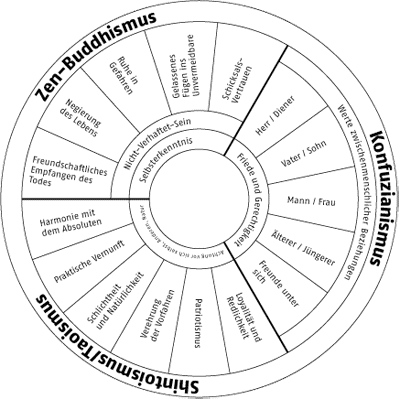 Iaido developed in a social rebuil­ding phase. The Samurai as guardians and model of valid order are deprived of their power. Other civil and economic developments became the guiding principle of society. Many of the ideas, values ​​and foundations valid at the time have been preserved in Iaido (via Koryu ) and in the Japanese Budo world.

The direct effect of a sword movement corresponds to Zen teaching. A sword fight has little room for reflection, but requires a quick and final decision. Zen means: practice instead of theory, non-conformism, alertness instead of conformity.

The training of a Samurai was very strict. As also in the sword fight, in which you can not moan, strict rules prevailed in the surrounding field of the Samurai. A system of interdependence and classification corresponds to the Confucianism. It penetrates all relations, social like personal.

Also in the Dojo (training hall) a (re)strictive order of rank is shown. That seems to be in the modern world somewhat backwardly. It is nevertheless reasonable, as long as it is not personally abused. Security develops only, if the arrangements of the teacher are kept. Safety and depth when practicing, for example, only arise if the teacher’s instructions are followed.

Shintoism is a nature faith of humans. Long time it was Japanese state religion. Shinto like also the theory of the Confucius was abused for influencing control of the lords. Perhaps the nature idea of the Shinto results in a romantic background of the own behavior. Some of them are transferred to Iaido in motion and orientation ideas. It is required agreement with natural movement and laws, purity. Harmony with the absolute one results in connection of necessity, requirement and its fulfilment.

The true face of Budo, sword fight and Iaido is falsified. Hollywood shows combat art approximately as exciting acrobatics. Storys of invincible Samurais are told. That is on the surface and too simple. Clever book authors (for example in the direction: Samurai for managers) want merchandise philosophy and conceptions. (Expensive) esotericism seminars teach useless Japanese martial arts philosophy to people.

The sword is no longer used but the spirit persists. The philosophy of Iaido teaches virtues, which can be experienced by training: e.g. simplicity, directness and determination. To learn and to explore these characteristics, is motivation for our exercise.

One can make some progress in sword skills and motion, without improving in the characteristics mentioned. If the learning goes too much apart from skills and spirit, one will have soon no more interest on training. Practicing becomes the superficial physical education. Faster, more frequent, senseless are attributes of sporting activity, not of a real Do (Budo can be sport, but sport is not a Budo). Literal implementing of the movements is the result. Stupid, degree-exact rules and regulations will be developed.

The control of the Katana and the techniques is the visible part of Iaido. The invisible part, the mental training, is by far more important. Here is the deep spirit of Iai. It is reason and source, why Iaido (and Budo) is still exercised till today and further developed.

There are many interpretations and conceptions over the old Samurai time. Today’s Iaido exercise does not give this not much attention. Iaido does not try to affect humans. Completely on the contrary Iaido obtains self reflection and truthfulness. 😉